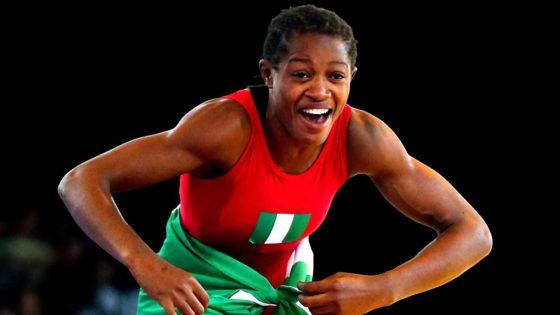 The management of Halogen Group, Nigeria’s leading security risk group has commended Nigeria’s wrestling Amazon, Odunayo Adekuoroye on her ranking as World No 1 female wrestler in the 57kg category.

Her latest world ranking is coming from winning her sixth gold medal with a 10-0 lead against Eman Ebrahim of Egypt at the final of the just concluded 2020 African Championship in Algeria.

Odunayo who was adopted by Halogen Group ahead 2020 Olympic Games in support of the federal government “Adopt an Athlete” defeated her three opponents, culminating in a 10-0 technical superiority victory against Egyptian No. 12 in the 59kg class, Eman Ebrahim in the final.

ALSO READ: Valverde: The only match I watched this month was Athletic Club vs Barcelona

The African Championship gold medal victory gave her 18pts, shooting her to the top of the world rankings at 57kg with 61 points. This is one point higher than the former No. 1, Kawai Risako of Japan who reigned until recently with 60pts.

In a statement issued by Halogen Group, the Group Managing Director, Mr. Wale Olaoye said;
“We are proud of Odunayo’s impressive exploits. Her consistent wins are similar to Halogen Group’s brand philosophy of professionalism, integrity, passion, and excellence. She has consistently displayed tenacity, zeal for possibilities in enterprise and eyes on the goal.

Those are pristine qualities of a Halogen Ambassador anywhere you see them. Halogen Family is not only proud to celebrate with Adekuoroye Odunayo and Nigerians globally as she is ranked World No 1 female wrestler in the 57kg category, but also confident that our adopted Athlete will shine bright at the 2020 Tokyo Olympics in July”.

ALSO READ: Valverde: The only match I watched this month was Athletic Club vs Barcelona

Mr. Olaoye added further that, “Success is about Leadership. We are equally very proud of the visionary Minister of Sports and Youth Development, Mr. Sunday Dare. His proactive drive, innovative ideas and passion for Nigeria have produced great results in Odunayo and other Nigerian Sporting Stars in just a few months of assuming office. Halogen Group is happy to be part of this winning story”.

Halogen Group has reiterated its commitment to be part of writing a new Nigerian story by identifying projects that drive excellence, passion for enterprise and integrity.

“This is all part of our unwavering commitment to creating an anxiety-free environment as espoused in our well-known motto – safety in an open world“, said Wale Olaoye, Halogen Group Chief Executive Officer.